A tree fell over from the high winds, I called and they came and removed it.

Angie
Hernan and his crew came out to my place in poway today. They did an awesome job on trimming and keeping my 40 year old orange and olive tree... looking happy and healthy. His crew rocks. They went a step above what they where asked to do by pulling weeds and getting rid of leaves that where on my patio and trimming shrubs they weren't paid to do. I will use them again and highly recommend them to anyone who needs tree work. Great job guysread more

bryan taylor
Hernan and Jose came to my house in Carmel Valley (San Diego). I have very high palm trees and many smaller bushes and trees. They were fast,... efficient and made my yard look so much better! They trimmed and removed trees and took out stumps. Highly recommend these guys and I was happy with their service.read more

Jacque O'Lea
Hernan and his crew were amazing! We lost a huge eucalyptus branch in the wind and they were there in 30 minutes and took down a huge tree in no time... - and they did a great job removing the stump as well. We would HIGHLY recommend this company!read more

Melissa Davison
Called and requested a (free) quote for my property, and received a call back the same day by a woman named Marlene who was extremely professional. A... gentlemen came, and provided an estimate; the pricing was very reasonable, so I hired them. I am very satisfied with their service and definitely recommend them!read more

Auryell Garcia
I had the team from Supreme Tree Experts price out removal of two Queen Palms about 20 feet tall. They worked with me on the cost of a couple of... possible ways to remove the trees from a 20 x 4‘ stone planter.From estimate to clean up everyone on the team was polite, considerate, and professional. The job was completed in time they had estimated. They were able to remove down to the root-growth and raked up every last seed from the grass, washed down the planter and surrounding concrete.Great company!read more

Laurie Kish
These guys are not cheap, but they do a great job and are capable of working in a high end garden without destroying it.

D. Delange
Amazing job! We were very satisfied with the service Supreme provided us. The whole process was easy from start to finish. Would highly recommend... them!read more

A quality and professional Tree trimming service (or pruning) in Los Angeles is essential for maintaining the beauty and health of your trees , as well as keeping your property safe from storm damage, and other weather conditions. Our tree service consists of natural shaping, branch trimming, crown reduction and tree removal. 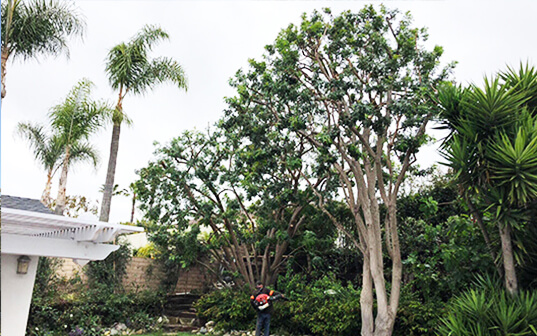 Supreme Tree Experts will help you remove any unwanted tree at a competitive price with our quality tree removal service serving Los Angeles. Also, in addition to this exceptional service, we always make sure your commercial or residential property looks fantastic after the stump grinding and stump removal is completed. We provide emergency services as well.

Palm Tree Trimming, unlike regular tree or brush trimming, needs experienced hands due to the extremely sensitive nature of the job. Our team prides our work on maintaining the health of your palm trees by never using spikes, and by disinfecting each tool that is used, every time. Also, our Palm Tree Skinning service in  Los Angeles helps remove the frond attachments from the trunk to prevent damage from external factors such as weather and insects.

Supreme Tree is Fully Licensed & Insured. We serve the next areas in Los Angeles:

Los Angeles is a vast city in Southern California, and is both the largest city in California and the second largest in the United States, as well as being the center of the film and television industry in America. Los Angeles is surrounded by the San Gabriel Mountain range and is divided by the Santa Monica Mountains.  Los Angeles  is adjacent to the Pacific Ocean in Southern California, and its major streets are designed to transport large volumes of traffic, many of which are extremely long, such as Sepulveda Boulevard—43 miles long—and Foothill Boulevard—more than 60 miles long—that reaches as far east as San Bernardino. Major highways in Los Angeles are Interstate 5, Interstate 10, Interstate Highway, and US Route 101. Points of interest in Los Angeles include Paramount Pictures Studios, the Walt Disney Concert Hall, the Griffith Observatory, Venice Beach, Downtown Los Angeles, Vincent Thomas Bridge, Universal Studios Hollywood, Disneyland Park, The Getty, Los Angeles County Museum of Arts, Santa Monica State Beach and Santa Monica Pier, The Broad, Dolby Theatre, the TCL Chinese Theatre, and many more.  Los Angeles is known for a variety of annual events, including the LA Shorts Fest, the Golden Globe Awards, The Grammy Awards, The Film Independent Spirit Awards, and the all-time favorite: the Academy Awards.

Supreme Tree experts serve the area of Los Angeles with five local dispatch crews available in Los Angeles County. Some of the most popular trees that grow in Los Angeles are Palm Trees, Orange Trees, Coast Live Oaks, and Moreton Bay Fig. At Supreme Tree Experts we have the responsibility of treating your trees with care no matter the type. The area of Los Angeles is prone to earthquakes due to the strike-slip San Andreas Fault, but you don’t have to worry, our team will make sure to remove any trees you consider dangerous in case of strong earthquakes or any emergency. You can count on us to maintain your safety.

“Great service! They cleaned my lot when they were done!”

“These guys are not cheap, but they do a great job and are capable of working in a high-end garden without destroying it.”

“Amazing job! We were very satisfied with the service Supreme provided us. The whole process was easy from start to finish. Would highly recommend them”

“I’ve used Supreme Tree Experts a number of times and have always been happy with the work done! Work was completed on schedule and the crew was very polite and on time. Would highly recommend to anyone looking for a knowledgeable tree service”

“Temis really knows what he is doing.  He is a tree expert.  He and his team came out to trim a very troublesome large tree and another average sized tree for us. They showed up on time, they were extremely professional and did an incredible job.  Temis who is a certified arborist supervised the entire job.  They cleaned up and put everything back the way they found it.  We are very pleased with the job Temis and his team did for us.  Thank you for doing such wonderful work.  I highly recommend and will be using them for ongoing maintenance and future tree trims.”

“I was really happy with Temis when he came to the house and looked at my tree situation.  We had a huge tree break during a wind storm and he had the guys out a few days later to pull the tree and all of the roots. Huge Job and reasonably priced. His guys were very friendly and did a great job.”

“Supreme Tree is an excellent company to hire! They were great with what I was looking for. Do you self a favor and hire a company that is beyond capable of meeting your needs! Thanks, Supreme Tree Experts!!”

“Apo was very professional and provided more than asked. His crew did a great job at cleaning up my tree removal. I would highly recommend and will contract him for future work!”

“This is my second time using Supreme Tree Experts. I’ve mainly had trees removed and can speak to their service with that but also See first hand how they sculpt my neighbor’s large trees. Professional, the cleanup and they understand how to properly shape a tree.”

“SUPREME…. Supreme Tree Experts have cared for our third of an acre property (large trees and shrubs) for several years.  They are true professionals, lace and trim trees expertly…No top/chop and go here. Their clean up is amazing and carefully done.  The crew is efficient and gets work done in a timely manner. I highly recommend! Thank you Hernan for the fine job!”

“Needed a Queen palm removed from our front yard. Was quoted from other companies quite a bit of money and a few weeks lead time. With Supreme Tree I was happy with the quote amount and they could do it within a few days!! Said they would be on sight by noon to remove it and I came home at 12:30 to find a couple of guys cleaning up, no palm!! Couldn’t be happier about it and would highly recommend them.”

“Supreme’s crew just removed a 100′ tall, 55-year-old ash tree from our front yard and did a “supreme” job.  It took 3 days including stump grinding.  They were on-time, on-cost, no property damage, and good safety procedures evident.  They left the work-site clean and ready for re-planting.  I recommend them!”

REQUEST AN ESTIMATE!
Scroll to top